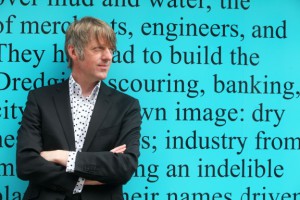 How do you begin to tell the story of any city, let alone this city, in something less than sixty minutes? I listened to
hours of workshops in community groups from all parts of Belfast, people talking about their lives in their city and mine. I was struck by the fact that when it came to the question of what had made that city great they all said the same things – world’s biggest shipyard, world’s biggest ropeworks, world’s biggest tobacco factory.

There was undoubted and justified pride, but the list seemed a little got by rote and a little remote (not just in time) from the speakers’ own experiences. When they talked about those, on the other hand, there was a different energy – their voices acquired individual colours. These were stories often of making ends meet, doing what needed to be done to get by – stories of great resourcefulness and ingenuity.

I began to think that most people didn’t need telling again about all the big achievements, but that it might be worth reflecting on and celebrating the fact that none of those achievements would have been possible without the investment over the decades – the centuries – of every person born here, drawn here or blown here by the winds of history or fate.

Ambition takes many forms and the city we leave behind will reflect what all of us living here right here, right now, put into it. Which – I hope – is something worth singing about.